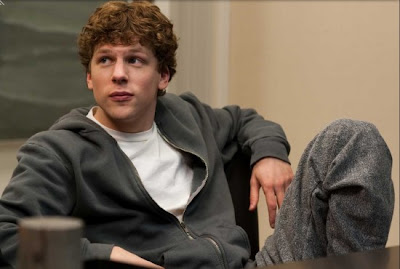 Famous book of Ben Mezrich 'The Accidental Billionaire' has been adapted in movie by team of screenwriter Aaron Sorkin and director David Fincher named "The Social Network". Financial upliftment is caused by Sony motion pictures and Trigger street Productions. Before its release, rumours about movie earlier transcripted the plot of movie, story of founding of famous social chitchat site "Facebook" [firstly, conceived as 'The Facebook', but later "The' is dropped by founder]. But, what I'm depicting here can be contrasting to others, because every dish got different ingedients, so is mine hence my dish got different flavour.

Movie begin with tensed conversation between protagonist 'Mark Zuckerberg' played unflappabily by Jessie Eisenberg and Erica Albright executed nicely by sensuous and beautiful Rooney Mara (last seen in A Nightmare on Elm Street). Mark, in his first appearance shows that he is an eccentric guy with strong prowess of responding as answers were already running on his lips. Conversation is happening with A and B round, as Erica questioned for A, Mark jumped to answer B. This impression implied Mark's geeky nature with girls, although having aplombed techno mind with, somewhere- a rage to pinched by Finals club. Whereas, Erica albright want him to be some social as he is getting too much inversed in this outrage of universities major clubs. Their slashy talks ended with Erica, after getting hard tantrum by conventional ideas of Mark, leaving him in angrily by his geeky answering. Her good bye statement- 'someday you'll be rich and famous, but you'll be surprised to know that girls don't love dick like you, because you are an asshole'- she suggests the complete story of Mark. He takes such rejection on his whim that night and got one bottle down of beer- transcripted his annoyance on blog by calling her bitch. But later, he realized that those words were written with ink and can't be deleted from someone's heart.

Furious thoughts on Erica on that night at Kirkland House become inspiration for Mark to create correlation site 'Facemash.com' in his dorm room. Image comparing site, programmed by playing some hacking tricks with network and algorithm by Steven Eduardo (played fantastically by Andrew Garfield)- expert in mathematics. On the site, turks can compare pics of two girls and on parameters of which they can find most sexuality among both. This invention by Mark trafficked Harvard Network, pull him for official investigation and resulted at the end with his six month academic suspension from Harvard.

Mark and Steven, two best friends and under grad at Harvard- hostilier in a dorm room, in which mark used to play on his apple mac book (which is somewhere not predented back in 2003). But due to 22,000 pages hit in single hour of his cousematching site, his fame evcacuated out of investigation room and swamped to lavish hostel rooms of twince brothers- Taylor Winklewoss and Calvin Winklewoss and Divya Narendra. They were already comes out with an idea on a social network site Harvard Connection, for which exclusivity is already attested with domain of Harvard.edu. Mark impressed by their membership proposal for image rehabilitation in university grad rolls, went on for a contractual relationship which in the end becomes conflicting law suit on his name.

The Social Network form a well balanced ground, having equal place for betrayal, love, money, unconventional creativity, sanity behind techno-brain. Director David Fincher has depicted a peculiar hypothesis of friendship, money and technological wisdom. Ben mezrich had scribbled a founding story of "Facebook" in his book picturing the life of Mark Zuckerberg and his unusal methodology of thinking and its actual fabrication.

Mark got latest idea of social network site 'The Facebook' from Harvard connection, firstly conceived by twince brothers but give its 'On air' working is completely different. The Facebook- which is throughouly programmed and optionalised by Mark itself, without any kind of familiarity to the ideas of Winklewoss brothers. This social network site give lot of spam to many members of Phoenix and other reputed clubs as planned by mark, which also screams to ears of winklewoss gentlemen. Intially adhering, but later on further fury, they decided to sue mark for stealing their idea.

Complete structuring and for subscription expenses of Facebook were financed by its CFO Steven Eduardo, pinched by phoenix club and got its intern. Eduardo, like a businessman, always being anxious about money earning from their valuable project as it sticks lots of people for a long time. But, Mark wants to create something big which can't be matched by anyone and cuddled the place of honour and respect for Mark in lavish finals club. Movie is sorted out with flashback scenes and events- where two suits on Mike- one by Eduardo for delusion in his share as C.F.O and second by twince brothers for stealing their idea.

On lapse of one hour, a clever enterpreneur Sean parker (Justin Timberlake) appeared on the screen. A gusty enterpreneur, wants to actualise the big idea of Mark and indirectly found self enrichment in building enterprises after loose idea of Napster.com. Facebook is corrected by him from The Facebook. Eduardo doesn't felt comfortable with inclusion of Sean Parker. Sean is a big enterpreneur and his business skills and experience can turn out to be fortunate for precious concept of facebook. Sean gets attached to Facebook after his short introduction at restraunt with Mark.

The Social Network got riveting mix of emotions which encompass several aspects of genius mind, who wants to cross out every bottlenecks from his life and defend its substantial notion of living at any cost. At certain point, greedy and betraying instinct of Mark might be seen uncomfortable. But I thought- it is not only mark but every human being on this earth is fixed strongly with these credentials. If anyone after exercising hard, brain crunching workout, achieve his dreamy vision, which he can visualised in his dreams before that, then nothing will be more relishing that inception. And more, if that relishness and satisfaction marks steps for further achievements then, he might not discover any doubt in going towards such scheme.

Whereas, Eduardo is also sympathetic character with emotional setback. He faced backstab from Mark not only in terms of financially and designatory matters but in respect to friendship and initial relatioships they sustained in early stage of Facebook. Eduardo is also justifed with his outrage on Sean Parker's access to Facebook. Eduardo financed Facebook at its intial stage and held responsible for its actual outcome. Since, with these two factors he is emotionally attached to facebook, or can't led anyone to part with his emotional aesthetic share as facebook CFO. That's why, Eduardo leave facebook premises by unchecking cheque of $ 19,000 offered by Sean Parker with unattached punch.
The biggest irony of this real story is that "A beautiful idea of revolutionalising friendship culture put ends to beautiful friendship between twos'.
As by this kind of consequential ending referred to one single thought that "You cannot earn $ 50 million without ditching your dearest friends".
Penned by Umesh Bawa at 2:45:00 AM