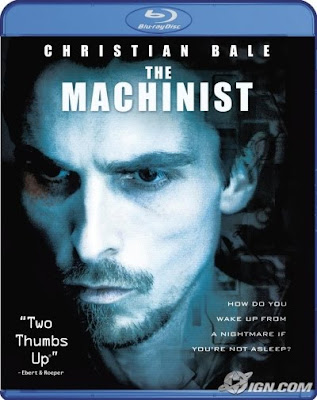 
You may have heard of something like insomnia, which makes someone incapable to have sufficient sleep in the night or sometimes eroused pyshic fallouts, usually most of movies in last decade of 20th cetury based on 'Insomniatic Tendencies'. But here, nothing is like that, as such is emphasised on tumulated behavioural traits of 'Dementiac Identity', in which mental situation of human being impairs intellectual capacity either to think and cause enormous damage to neurons in the brain. It demonstrate a mental state of a person, where he can't even differenciate between good one or a bad one. It would be here where every human being has to make a real connect with voice of oracle coming directly from his soul, in order to obdurate all these tumultous psychopathatic attacks.

In this movie Christian Bale played a role of pyshe inhabited guy "Trevor Ruznick" (had loose 60 pounds to act indeceptibly), who works at metal factory , where he is employed at manufacturing section. Medically, he is not so much fit, this was certainly due to his inadequate sleeping habit which provide him unvoluntary mental illness and made him short of his memory, this is why he sticks slips everywhere in order to memorize daily routine works. his colleagues does not like him, and his unfit or unstuiable acts made him spared from their social talks. There are two womens here those give immense support; socially and sexually to address his desire top be part of this earth. Stevie(Jennifer Jason Leigh ), a Prostitute; staisfied his sexual needs everytime he asked her for that. She was somewhere compassionate about trevor, because trevor is only male who stands to be the real matured guy, she had ever met. Marie (Altans Sanchez-gijon) on the other hand a waitress at airport cafe does understand him in a better way as she also lives alone spared from his husband with his child Nicholas. Trevor formally wents to cafe to just have some relaxing talk with her. Both of these women pour him with full garlands of love and punt away his distressed moments.

In amidst of all these Trevor used live alone in his dark life, with his geek nature. Going by all days, suddenly one day he met with an unprecedented happening- in which due to his mistake one of the worker Miller has to loose his left hand which is plucked by running machinery. By this, Trevor wore an unsuitable massacirist mask on his face, and his colleagues went onto fearing Trevor Ruznick. This cost nothing like finanacially to him, but somewhere the curse of nature used to bluster him all the time. Suddenly a person comwe into his discomforted life Ivon- who makes it more worst. He invites mallicious and violent attempts to harm the identity and menatl piece of Trevor. By which, Trevor couldn't be able to live life more conviniently anymore. He becomes helpless in wake of every adversity and grew more violent in talking with anyone related with Ivon - as he think that reason behind happening everything wrong with him is IVON. Distracted by acts of Ivon based on him, he replied to the situation with dangerous compliments- by killing those who were dearest to him in his life and suspending the unusual curse of miller by piercing his body in half. Surprisingly Trevor find himself unhelping trapped into a cage, which is ultimately locked by him with his own hands, and now at the end he finds the key to unlock it. He went for imprisonment in wake of desire to slep for a long-long time and to forget everything happened with in past..................

Now the question arised here is that - Can anyone is so fool enough to kill someone dearest in life in return of dissappointment from life? Ain't Scott Kosar has misinterprated the theme of life while penning the script work or Brad Anderson seems me unconcerned about the living terminology of any homo sapien- by long committments of his direction only on sexual satisfaction, akin to story of socially inept guy Trevor? I think the collaborated company of Brad and Scott had switched to a mucky concept of misfortunate life where fate decides nothing. Otherwise, The Machinist is not a kind of entertaining one- unlike all hollywood where viewers make lot of fun and puff out their smoke sticks- where the layer of projector is shielded darty witty appearance and twisted life of Trevor Ruznick- finds himself misfit on this globe. Albeit combination of an adonised writer and director caught the hidden lamency of life and present certain unknown factors occured to someone, to which sometimes becomes uneasy to combat.......
Penned by Umesh Bawa at 10:05:00 PM