Are We "A SHINING NATION"?? 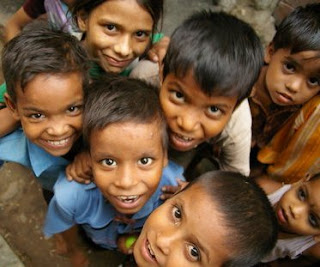 Recently, a news is splashing on regular news channel in the morning which goes like - "Indian Cricketers went across to slums and introduce themselves to blind children. They don't even know who is sachin, yuvraj, harbhajan." This is because they are not the part of people like us. They are most un-priveleged, disadvantaged section of the society. To whom we like to address with pity features of our testimonies. These people always went deprived of their basic rights on 28 February. It is also to be considered here that, until independence Britishers buy a lot of annoyance from us. Such kind of ruling has been termed as Slavery by some sluggish freedom fighters existing today. But, what would be the best possible term for today's bureaucratic regime. Is our minds cloaked to logjam of thinking, when it comes to breakdown of such malicious acts of blasphemy. According to the latest studies, it enquires that almost 38.4 per cent of children of under three years are stunted to be too short from their age, looks like a small and weak toy in front of children of rich class. There are 46 per cent of children who are too thin from their age, whereas 79.2 per cent of our children under three years are anaemic. Also, among the pregnant women, anaemia has increased from 50 per cent to 58 per cent during the last two years.This is the bright future of shining India.
Earlier On February 28 2011, Finance Minister pranab Mukherjee had been honored with garlands of Budget has been declared and several has been made in Finance Act.

"Finance Minister Pranab Mukherjee announced in his budget speech that the long-promised National Food Security Bill would be moved in Parliament “during the course of this year” but failed to make any financial allocation to back up this statement."

Harsh Mander(Head of the NAC's working group on the National Food Security Bill) “We have been given the full mandate to go ahead with framing the Bill based on our own recommendations. NAC's view of its job was to “advise” the government and “not to be influenced” by its predilections. Where this leaves the issue of food security is anyone's guess."

UPA alliance have to confess that at several instance, they had been failed to address unleashing welcome of deprivation and underestimation of plight of succeeding inflationary pressure. Even though, after several recommendations of NAC (National Advisory Council) comes out to be failure on the platform of global recession and in extracting inflationary impacts out of the economy.

Now there is another stigma on the balanced third power of planet country is "Child Labour. This is going to be the part of country's massive belt of industrialization. All become possible just after the incorporation of industrialising Indian economy in very first five year plan. Which aimed at strengthening agricultural facilities through development in such tertiary industries. Almost 90% population is surviving under the cover of agricultural earning. Child labour rises massively with the unwrapping development of corporate infrastructural entities. These institutional stretching meant for meeting the needs and creating a platform for agricultural diversification at initial stage. hence, this posed a urgent need of human resource to cater the need of plenty. Such raised situational imbalance, led lots of child to enter into such arena. And this impending curse is still going successfully with extensive mechanisation. But, the thing really consume my attention is that, the core reason of flapping outstretch of developmental process of aid to agriculture went unreasonable. The number of child labourers in tertiary sector has been increasing since 1991. At present their presence is very high in bars, restaurants, internet cafes, malls, retail chains, transportation sector, communications, banking, and business establishments. Prior to 1991 most of them were seen in primary and secondary sectors like agriculture, manufacturing industry, etc in India. Some of them have also been working in highly hazardous and unsafe industrial establishments. Most of them without any special economic benefits though they work in life threatening industries.
Here question is arised in my mind that: